No one needed an iPhone until Apple made one! – Can you really create needs that don’t exist? No! – Meet Myth number 2 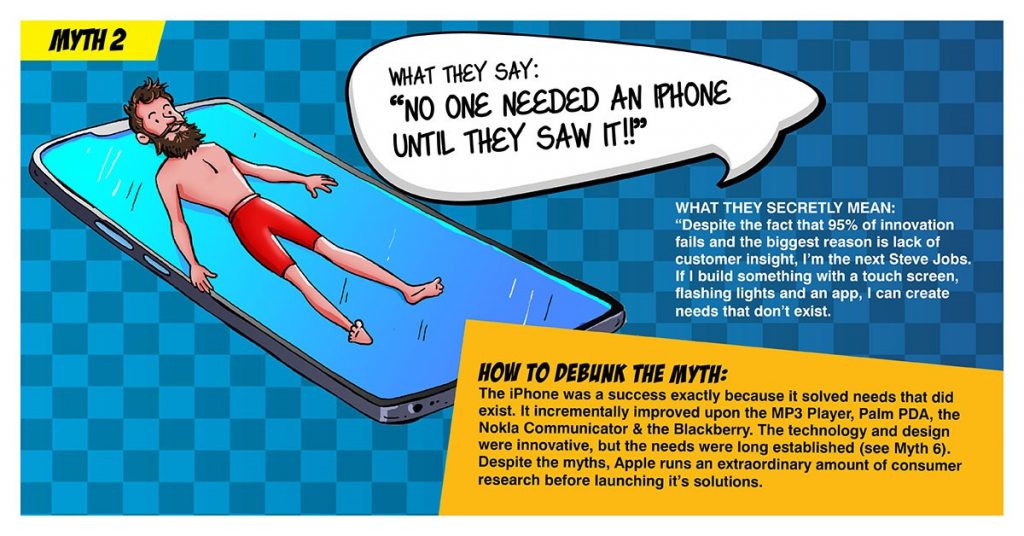 You know when the #Officeboor tells you repeatedly that Steve Jobs just stuck his finger in the air, created the future and developed the smartphone when no one asked for it. That’s a lie.

The sort of people who say this believe they are the next Steve Jobs because they have a goatee beard and are toying with the idea of being a Vegan at weekends. They also believe that they can create needs that don’t exist, push technology onto the market and avoid the inconvenience of having to ask consumer at all.

I think they probably find it quite tedious having to justify their innovation ideas!

Much better to create a parallel universe in which the biggest reason that innovation fails isn’t lack of consumer insight.

However its a myth that the iPhone created needs that didn’t exist. For those of us old enough to remember, the iPhone built on the pre-existing market created by the touch screen PDA’s, Palm Pilots, Nokia Communicators & Blackberry’s of the world.

The need to surf the internet on a phone was well established (remember WAP?) it just wasn’t very elegantly executed.

We knew we wanted to carry 1000’s of music tracks with us on the go and already had Creative Zens, iRivers and iPods.

The iPhone didn’t create new needs, nor did it ignore the voice of the consumer. Instead, it very cleverly enabled those needs through a better and differentiated solution. Just as it should be!

Just for the record, Apple run tons of consumer Market Research annually, so remind the #officeboor of that next time they peddle that old iPhone myth.

What do you think?

Find out more at MatShore.com