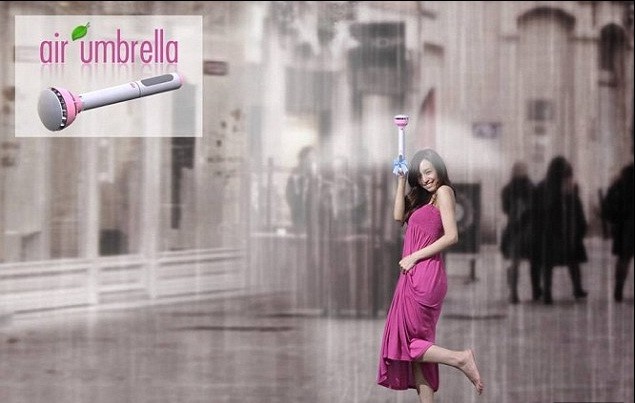 Reading through various tech publications this week, I’ve noticed a certain Kickstarter project seems to be creating a lot of noise. And by ‘noise’ I’m not referring to whoops of excitement, -more the collective sound of palms slapping foreheads (from those with a little common sense at least!)

This is the offending invention:

A turbo toilet plunger? Some kind of beacon? A cost saving Olympic Torch for cash strapped nations? A low budget sceptre for the financially-conscious monarch?

Created by Chinese inventor, Chuan Wang, the Air Umbrella is presented as an ‘invisible umbrella’ that enables you to pitch wind against water in the quest to stay sheltered from the rain.

In essence, the device consists of a rather clumsy looking stick which contains a lithium battery, which in turn powers a fan. When activated, the ‘umbrella’ blasts a canopy of air which supposedly deflects rain. A sort of ‘force field’ to protect you from incoming precipitation attacks:

It sounds like something you would see in a ‘70s kung fu movie, but it pains me to break it to you that the Air Umbrella may soon be coming to a Wilko’s near you. Having already gained over 250 backers on Kickstarter, the project has more than tripled its $10,000 crowdfunding goal and still has over a week to go.

But why?? I can only assume that the army of backers is made up of people who enjoy collecting ludicrous curios as ‘conversation pieces’; or people who just have spare cash and too much time on their hands.

While the Air Umbrella may provide amusement as a whacky idea, it’s viability as a sound innovation is pretty much non-existent. Not only is the device potentially unfit for purpose, it seems likely to create more problems than it would solve. Matched against our Sin list the Air Umbrella ticks the boxes of ‘pushing not pulling’ (Sin number 1) and, perhaps more blatantly, overcomplicating things (Sin number 5). We have a project that attempts to re-engineer the basic umbrella but does so in a way that not only fails to improve on an existing product, but actually adds barriers to the process of sheltering from the rain.

According to Air Umbrella’s Kickstarter page, the main model type (there are three, I’ll return to this point shortly!)weighs around 850 grams, which is almost equivalent to the weight of a large bag of sugar. Who would want to walk around holding something that heavy above their head for any length of time??

A little research shows that the average umbrella weighs less than half of that.

Perhaps you are thinking that although it’s heavier, it must be smaller in dimension than the best alternative?

The air umbrella is 50cm long, whilst the bestselling folding umbrella on Amazon is only 30cm when you are carrying it around.

So it’s both heavier and more bulky than the current alternatives, maybe this was the reason Mr Wang decided to give his product a relatively short battery life.

Adding insult to injury, the top model only retains enough battery life for 30 mins of rain dodging, and then you face the hassle of having to re-charge the device. I was under the impression that the whole point of umbrellas (especially the small fold-up ones) was convenience; the ease of being able to quickly grab one from your bag to shelter you from unexpected downpours. What’s convenient about a product that constantly needs recharging?

I mentioned earlier that the Air Umbrella comes in three models: versions A, B and C. The latter two both have a battery life of 30 mins, with version C coming with the added bonus of an adjustable handle. Version A is smaller, slightly lighter, but only retains its charge for 15mins. And predictably, it’s aimed solely at women! Not only is it patronisingly sexist, it won’t even function long enough to keep the little women dry while they do the weekly shopping and the school runs!

Interestingly, a Kickstarter member has commented on the short battery-life of the Umbrella, to which the creator has responded with the admission that his device may be “more suitable for people who have a car”.

But Mr Wang, that’s so narrow in its scope, I’m sure I can add to that list.

Let’s think carefully about the target of this value proposition, can’t we add?:

I suspect the Air Umbrella raises a couple of other issues too. Firstly, the device makes use of fan technology to blow the rain away. I’ve yet to find a completely silent fan, so surely the Umbrella emits some level of noise?

Then there’s the risk of blowing rain on to other people. Judging by the tech-spec, the Umbrella has a splash-zone of 50-70cm away. So anybody in close proximity will get a soaking.

Clearly the well-established alternative design protects the user from the rain, but allows the rain to fall safely and inoffensively just to your side.

Mr Wang doesn’t seem to think this is a problem; by his logic, if it is raining then other people will have their own umbrellas to protect them from splashback. If other pedestrians don’t have their own umbrellas then they’ll get wet from the rain anyway, so they won’t mind any additional water that is being forcibly powered at them by the Air Umbrellas of nearby car loving women and professional athletes. (I’d love to see how that excuse works in practice!)

Moving on to the Reason to Believe, it becomes clear the designers are not even that confident that it works in practice!

Reading their Kickstarter proposal, they admit that after two years of product development, only one of their samples achieved the goal of protecting people from the rain, but that version of the product still needed more improvement; this prototype was designed to take a large amount of airflow, meaning the top was too big, which didn’t achieve the portable characteristic.

What’s that you say?

So the only sample that actually worked required the device to be far bigger than the gargantuan specifications I described earlier.

It seems that when the design is a practical size and weight, you’ll probably end up getting wet!