This quote isn’t accurate! – Here’s why… 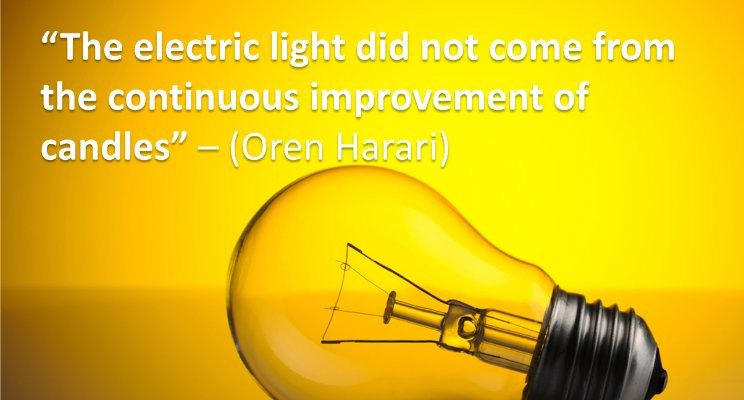 I have seen this quote from Oren Harari who was a business professor at the University of San Francisco and the author of a number of management books doing the rounds on Linked In and noticed lots of people like it.

They show their appreciation by clicking the little thumbs up underneath it in their droves, but I wonder how much thought they’ve considered it as a statement of fact before clicking ‘Like’?

Here’s why it bothers me.

Let me enlighten you on what I mean…

Shall we start with the invention of the light bulb? Seems like as good a place as any.

According to Livescience.com – In 1800, Italian inventor Alessandro Volta developed the first practical method of generating electricity, the voltaic pile. Made of alternating discs of zinc and copper — interspersed with layers of cardboard soaked in salt water — the pile conducted electricity when a copper wire was connected at either end. While actually a predecessor of the modern battery, Volta’s glowing copper wire is also considered to be one of the earliest manifestations of incandescent lighting.

Not long after Volta presented his discovery of a continuous source of electricity to the Royal Society in London, an English inventor named Humphrey Davy produced the world’s first electric lamp by connecting voltaic piles to charcoal electrodes. Davy’s 1802 invention was known as an electric arc lamp, named for the bright arc of light emitted between its two carbon rods.

There you have it. The technology was not created initially with the direct intention of making a light, but very soon afterwards according to the record books, someone matched the science to a useful application in this case a new way of creating light.

In modern day terms they applied Volta’s technology against a well-established need and created a value proposition for his voltaic pile.

And what was that need?

Well here’s the rub. I think it was that candles didn’t create a consistent source of light, were smelly, created mess and smoke and had a tendency to burn your house down.

Clearly there were other unmet needs that candles simply couldn’t address adequately such as places high up, deep underwater or out of reach where replacing candles frequently would be difficult.

There were incremental needs alongside disruptive needs.

Those incremental insights around the deficiency of candles would only be solved by referencing the candle as the current best in class solution.

Surely when it came to judging the new value proposition of a light bulb, it would have been how well it improved the benefit vs the candle?

I’ve seen loads of technologies in my time that seek to deliver the benefit in a new way, but at the end of the day they are judged a failure because they involve huge complexity to switch away from the tried and tested status quo and they hardly shift the needle vs the legacy solution.

Everyone who sees my case study on the Air Umbrella above asks the same question straight away.. How does it improve on a conventional umbrella?

Would Oren Harari also contend that the car did not come from the continuous improvement of the horse I wonder?

The irony of all this by the way is that after well over a hundred years, modern light-bulbs such as LED’ are desperate to make themselves have a light that feels more warm and less harsh. Sort of like a candle would create.

Perhaps the light-bulb still has a lot to learn from the much maligned candle, written off as redundant in that quote doing the rounds on LinkedIn?