You won’t believe this $100 million juicer for suckers! 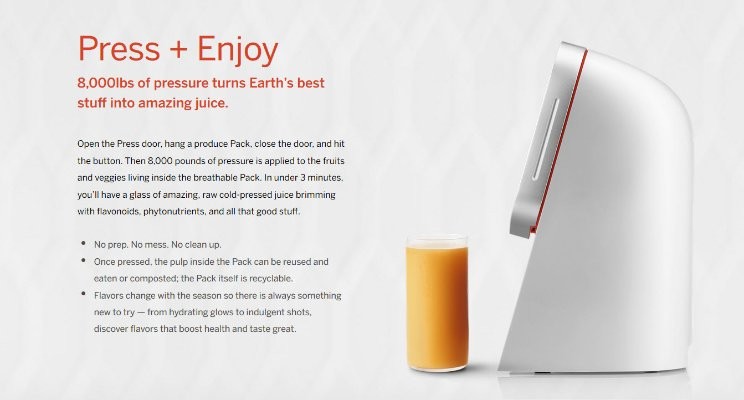 For many years I’ve told the story during my Insight training about the internet connected Iron that I was asked to consult on.

It held the owners phone number, email address and cell phone number and if they left their iron on at home, it called or messaged them a warning to get back in their car, drive home and turn the iron off.

The killer part of this story for me was that fact that the same team had another iron that contained an gyroscope and accelerometer. If you didn’t pick the iron up, it turned itself off.

When I asked them why they selected to launch the internet connected iron vs the alternative, it was clear to them. People expect high tech solutions from high tech companies.

Somehow to have launched the solution that delivered clear benefits in a sensible way would have been failure because it wasn’t technologically challenging.

So it was with a heavy heart that I heard about the Juicero story over the weekend.

If you haven’t heard about this debacle, buckle up. It’s a doozie.

Juicero has positioned itself as the next hardware/software combination to come out of Silicon Valley. A piece of expensive electronics with a new type of business model where the consumer pays through the nose for an ongoing consumable component.

Of course it’s all monumentally over engineered promising a wifi-connected juice pressing gadget with customised packets of pre-prepared organic fresh fruit and vegetables squeezed into a glass by a machine that applies “8,000 pounds of pressure”.

There is a great article about just how over-engineered the Juicero is and why it’s so expensive here if you’re interested in the engineering. https://blog.bolt.io/heres-why-juicero-s-press-is-so-expensive-6add74594e50

And because it’s high tech and because Silicon Valley seed fund managers seem to have more money than common sense, it’s received $100 million dollars of funding for what turns out to be an unqualified and fruitless innovation (excuse the pun)

Well according to the Times “In a test, reporters from Bloomberg found that they could wring 7.5oz (210 ml) of juice in a minute and a half from the recyclable bags. The machine, built of “aircraft-grade aluminium and precision-forged gearing components”, took about two minutes to yield 8oz. Far from doing “something truly monumental”, Juicero appears to have been attempting to sell a $399 device for emptying packets of pre-juiced fruit and vegetables.”

To add insult to injury the company defends the machine by saying that it has clever technology on board which can read the best before date of the sachets and cross reference it against on online database automatically.

Or of course the consumer could read the date on the label just as easily without shelling out nearly $400.

I’m glad I’m not the venture capital guru that’s got to explain those findings to my boss.

But have those masters of innovation in Silicon Valley shown any hubris or contrition at the revelation that their $100 million folley is worse than squeezing a bag by hand?

No, banish such a thought from your minds.

Jeff Dunn, Juicero’s CEO, said: “You won’t experience that value by hand-squeezing Produce Packs. What you will get with hand-squeezed hacks is a mediocre experience”

The value I’ll experience Jeff, is more juice in my glass and the feeling of $399 more dollars in my pocket.

It never ceases to amaze me the blinkered belief that clouds judgement when it comes to technology companies.

You see people contesting on LinkedIn and other forums that the rules we all understand simply don’t apply to them and the rest of us just don’t get it.

We do get it! We can tell when something is pointless and over complicated!

Remember Jeff, While it comes to juicers, no one wants to be perceived as a sucker!